Wholesale auction sales growth of vehicles up to 8 years old reached an estimated 108,000 units the week ending June 28, down 3% vs. the week prior. While week-over-week figures were down slightly, sales were still robust and ended the period 7% above the 101,000-unit pre-virus forecast for the week. Sales during the past four weeks have consistently beaten pre-virus expectations and exceeded 100,000 units per week. 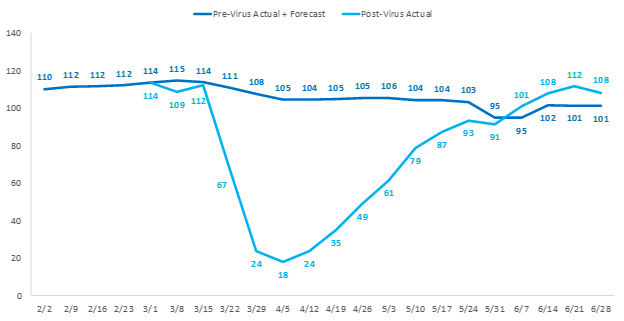 On the premium side of the market, week-over-week results varied greatly. Small premium SUV and car segments experienced the biggest gains in the industry, up 22% and 20%, respectively, followed by an 11% increase in the midsize premium car segment. At the opposite end of the spectrum, compact premium car sales fell 8% followed by a 5% decline in the compact and midsize premium SUV segments.

Wholesale auction prices of vehicles up to 8 years old improved for the 10th consecutive week, rising 1.6 percentage points for the week ending June 28. Prices improved 22 percentage points during the past 10 weeks and are now 7% higher than at the beginning of March. 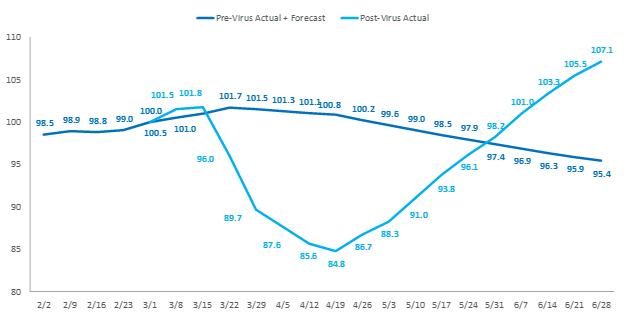 On the premium side of the market, price gains were led by a 2.4% increase in the midsize premium car segment. Compact car and SUV prices rose 1.8% and 1.7%, respectively. Remaining premium segment prices were flat to up slightly, except for large premium car. Prices of large premium cars fell by 0.5%, making it the only segment to experience a decline last week.

Wholesale prices are currently exceptionally strong and the consistent growth week to week provides no indication that prices will fall materially near-term. The robust pace of retail sales since the end of May also supports a positive outlook, as dealer demand for replacement inventory remains high. As such, concerns over an influx of off-rental and off-lease supply are moderate as these units are entering a welcoming market. Headwinds persist, however, especially as they relate to pandemic-related macro-economic volatility which may create additional friction in this channel moving through July and August.

Sales of used vehicles at franchised dealers beat pre-virus forecast by 12% for the week ending June 28. The strong demand for used vehicles is consistent with prior periods of challenging economic conditions. Additionally, reduced incentives on new vehicles drove up monthly payments, which further bolstered demand for the affordability of used vehicles. Despite the strong volume gains at retail, used retail prices were flat for the week ending June 28 vs. the prior week and flat compared to pre-virus levels.