The Wholesale auction sales remain robust. Wholesale auction sales of vehicles up to 8 years old reached an estimated 97,000 units the week ending July 12. Sales declined 3% vs. the week prior, however they remain at a healthy level. The decline can be attributed to carryover effects stemming from the July 4 holiday which, unlike recent years, landed on a weekend, likely influencing results for the weeks ending July 5 and July 12. 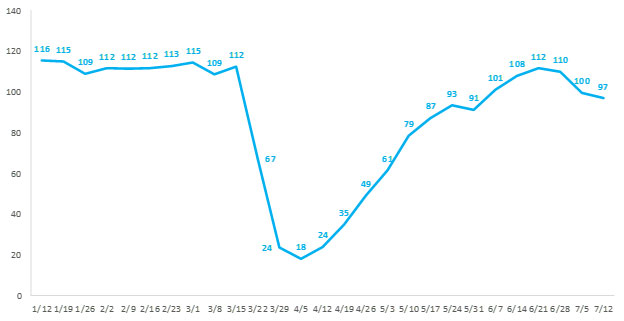 Wholesale auction prices improved for the 12th consecutive week, rising 1.5 percentage points the week ending July 12. The result was a slight improvement vs. the prior week, however, was not as strong as the four weeks leading up to July 4 during which prices improved by a weekly average of 2.3 percentage points. Prices have improved 30% over the past 12 weeks and are now 10% higher than at the beginning of March.

Wholesale prices for mainstream segments the week ending July 12 increased an average of 1.4% vs. the prior week. Midsize and large pickup prices continue to be exceptionally strong, increasing 2.8% and 1.8%, respectively. Midsize car and small SUV segment prices increased a collective average of 1.5%, while remaining segment growth was at or slightly below the industry average for the week. Premium vehicle prices were up an average of 1.6%, with growth being led on this side of the market by small and compact premium cars increasing 2.9% and 2%, respectively.

While wholesale prices remain incredibly strong, expectations are that they will begin to drift lower heading into August as pent-up demand wanes and pandemic-related macro-economic headwinds increase. By year's end, prices are expected to be on par with pre-virus levels. It is important to note, however, that while the outlook is relatively optimistic, there remains a great deal of uncertainty surrounding the effect of new virus outbreaks, the potential for another round of federal stimulus, and overall employment conditions. Given these unknowns, a heightened degree of market volatility should be expected.

Sales of used vehicles at franchised dealers beat pre-virus forecast by 12% for the week ending July 12. The strong demand for used vehicles is consistent with prior periods of challenging economic conditions. Additionally, reduced incentives on new vehicles drove up monthly payments, which further bolstered demand for the affordability of used vehicles. The strong volume gains at retail are leading to higher used retail prices. Used retail prices jumped 1.4 percentage points the week ending July 12 vs. the prior week, and prices are now 3% higher than pre-virus levels.