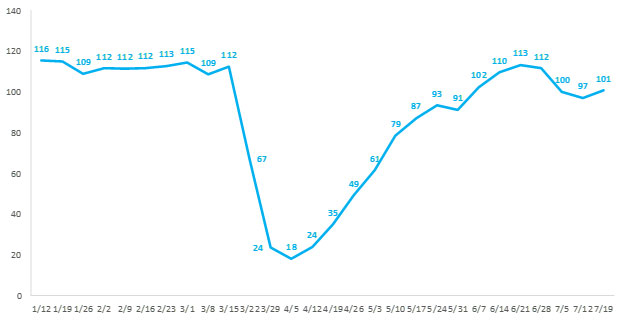 Wholesale auction prices improved for the 13th consecutive week, rising 1 percentage point for the week ending July 19. Last week’s result was the smallest week-over-week increase recorded since prices began their recovery in April. However, prices have grown 32% over the past 13 weeks and are now 12% higher than at the beginning of March. 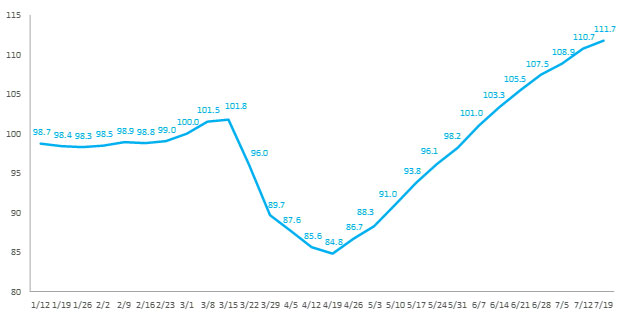 Wholesale prices for mainstream segments for the week ending July 19 increased by an average of 1% vs. the prior week. Large pickup prices continue to be exceptionally strong, increasing 1.7%. Most mainstream segment prices grew 1% to 1.3%, however, small SUV, compact SUV, midsize car and large car gains were lower, ranging from 0.3% to 0.7%. Premium vehicle prices were up by an average of 1.2%, with growth being led by a 1.8% increase in the small premium SUV segment. Small, compact and midsize premium car segments were also strong with prices up 1.5% each. However, at the opposite end of the spectrum, large premium car prices were essentially flat, increasing by a slight 0.1%. While wholesale prices remain strong, the rate of growth week-over-week is beginning to slow.

Expectations remain that prices will begin to drift lower heading into August as pent-up demand wanes and pandemic-related macro-economic headwinds increase. By year's end, prices are expected to be on par with pre-virus levels. It is important to note, however, that while the outlook is relatively optimistic, there remains a great deal of uncertainty surrounding the effect of new outbreaks, the potential for another round of federal stimulus and overall employment conditions. Given these unknowns, a heightened degree of market volatility should be expected.

Sales of used vehicles at franchised dealers beat pre-virus forecast by 1% for the week ending July 19. While this represents a slowdown vs. the past six weeks, it is still indicative of strong demand for used vehicles, which is consistent with prior periods of challenging economic conditions. Used retail prices rose once again, increasing 0.5 percentage points week over week during the week ending July 19. Prices are now 4% higher than pre-virus levels.