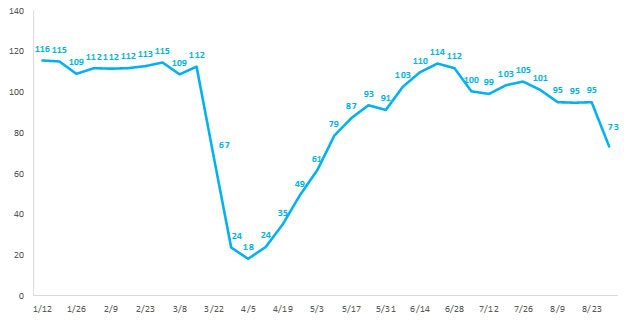 Segment-level auction sales on the mainstream side of the market were down by an average of 20% for the week ending August 30. SUV segments experienced the biggest sales declines, midsize and large SUV volumes fell by an average of 30%. Remaining mainstream results were mixed, however, they remained closer to the overall sector average for the period. On the premium side of the market, sales were reduced by an average of 34% the week ending August 30. Premium results were mixed across segment types. For example, large premium car sales fell by 58% followed by 47% reductions in large premium SUV and small premium car sales.

Wholesale Auction Prices Move Lower Once Again
After several weeks of slowing price appreciation, and flat-to-down price movement, the week ending August 23, wholesale auction prices moved lower again the week ending August 30. Prices last week were reduced by an average of 0.9%. As wholesale prices continue to soften, it’s important to remember that they remain 35% higher than their trough in April, and 14% above their level at the beginning of March. Wholesale prices for mainstream segments declined by an average of 1% the week ending August 30 when compared to the prior week. Prices on the mainstream side were down again across the board. Losses for the week for passenger car segments slightly outpaced the overall sector average as small, compact, midsize, and large car prices fell by an average of 1.2%. In general, mainstream SUVs performed better, with prices down an average of 0.6%. Premium prices once again performed better than their mainstream counterparts. On average, premium segment prices were flat for the week ending August 30. While most premium segments experienced small price declines, small and midsize premium car prices improved by 1.6% and 0.3%, respectively, which helped balance out the overall sector average for the week.

Despite a slowing used market, wholesale prices remain strong. Prices are expected to continue to move lower through September and into October as pent-up demand has been satisfied and pandemic-related macro-economic headwinds increase. By year's end, prices are expected to be slightly greater than pre-virus levels. It is important to note, however, that while the outlook is relatively optimistic, there remains a great deal of uncertainty surrounding the impact of new virus outbreaks, the potential for another round of federal stimulus, overall employment conditions. Given these unknowns, a heightened degree of market volatility should be expected.